Authors on occasions fall in love with their characters ... and I am no exception. Only problem is, my character is a camel ... Bud from A Dangerous Game of Football. I have no doubt there's a great many teenagers out there who will agree with me, having read this book whilst at primary school. Published originally in 2009, and relaunched as A Dangerous Game, as the name suggests, our hero Jack Burnsides is a keen footballer. When his best mate disappears, with the aid of Bud, who just happens to be magical, he sets off to find him, embarking on a journey to a land ruled by sun, sorcerers and giant crows.

Bud, however, is not your super-hero, like Captain America or Batman. No, he's more like your anti-hero. Yes, of course he's magical, but he also spits and smells and is both bad-tempered and rude, hilariously funny and quite perfect.

Of course, there had to be a sequel and along came, The Bird Children. A little more scary this time with Jack trying to save Bud from Mendorun, the sorcerer whose plans include becoming the most powerful sorcerer on earth.

And that's where the adventures of Jack Burnside stayed, until fed up with my daughter and granddaughter nagging, I set about writing the third book ... The Lions of Trafalgar. And on its pages, another memorable character came to life ... Capstick, one of the lions that guard Nelson in Trafalgar Square. Unfortunately, they come alive and so does Nelson. And mayhem ensues.

Is Capstick now my favourite? Has he knocked Bud off his pedestal?
You need to read the series to find out: 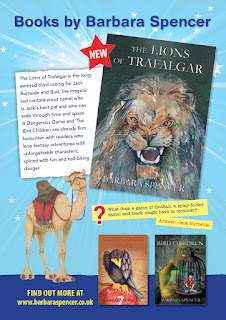